Four British women – known as the Ocean Sheroes – have smashed the Guinness World Record for rowing from San Francisco to Hawaii, beating the previous record by 14 days, in a venture supported by LRQA.

The female four covered the distance of 2,400 nautical miles in 35 days, 14 hours and 32 minutes, cutting two weeks off the previous record. They are the first all-British female team of four to complete the Great Pacific Race, enduring 30-foot waves, 50mph winds and a relentless 24/7 schedule of rowing two hours on, two hours off.

The British Ocean Sheroes team of Bella Collins, Purusha Gordon, Mary Sutherland and Lily Lower were supported by LRQA. The team said, “Thank you for your incredible support! Couldn’t have done it without you - so grateful to have had you on our journey with us!”

Mary Sutherland put the team’s success down to their toughness, saying “Resilience and being goal- focused is key, along with knowing your team’s capabilities and how hard you can push them. These ladies didn’t disappoint. We spent a lot of time learning each other’s motivations, personal goals and personalities. Throw in a general ‘get it done’ attitude and you have a recipe for great things. My personal expectations of what our team could achieve was around the 40-day mark and I’m so happy to have blown that out of the water.”

The Sheroes are using their success to raise awareness and funding for the Seabin Project, which automatically captures ocean pollution and plastics, down to a size of 2mm. 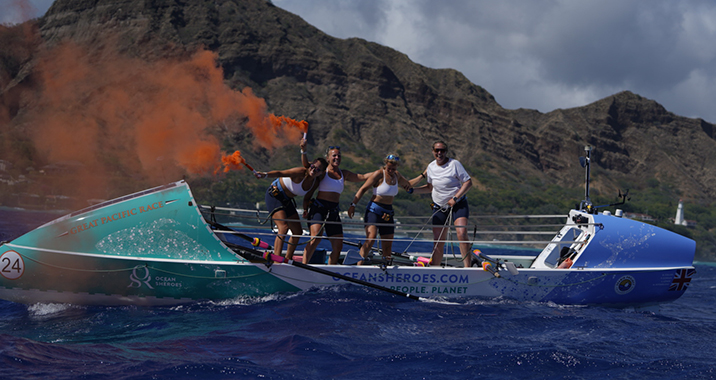