The ISO 3834 Journey of Portobello-RMF Engineering

A single contract set Portobello-RMF Engineering off on a journey to become ISO 3834 certified. Managing Director Graham Avill talks about that, Brexit, and the changing landscape of the global pressure vessel market. 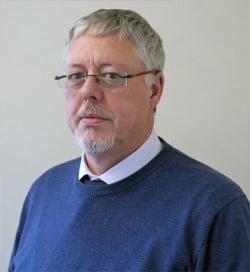 In the third in the series of our interviews with key pressure vessel manufacturers in the UK we sat down for coffee and chat with Graham Avill (MD - pictured) at the Portobello-RMF offices in Sheffield, to talk about ISO 3834 certification, the Pressure Vessel Manufacturers Forum (PVMF), and his take on Brexit’s possible effects.

Portobello-RMF’s roots go back to 1933 when it started as “Portobello Sheet Metal Works Limited.” In 2009 it merged with RMF Engineering to become Portobello-RMF Engineering Ltd. Portobello-RMF specialises in the mechanical design, thermal design and fabrication of process plant equipment such as heat exchangers, pressure vessels, skid packages, pipework and other bespoke, special, and high-integrity fabrications. It is also approved to LRQA’s (LRQA) Rules for ships as they design and manufacture pressure equipment/chambers for subsea rescue. We began our conversation talking about ISO 3834 and how their journey to full certification began.

In 2016, you achieved ISO 3834-2 certification with LR. What was the driver for implementing it?

Graham Avill: Initially we won a contract to build a flash vessel for a Norwegian offshore project. The vessel was 2.5m diameter and 9m long in Duplex Steel S31803/2205. The client wanted it manufactured to ISO 3834. Although we were not certified at the time, we were working to the standard.

The client audited our systems and welding processes and found that we were 99% compliant for their requirements, just without the certificate so they were happy for us to proceed. However, they recommended that we go for the certification as they wanted to place more orders with us.

We originally achieved our certification through another body but switched to LRQA in 2016 as we found that the administration and communication with the inspectors better suited our way of working. At that time, we believe that we were only the second or third pressure vessel manufacturer in the UK to hold this certification.

ISO 3834-2 is the comprehensive level of the welding standard. Why choose that level?

More clients were asking for vessels to be built to ISO 3834-2 and the Norwegian client specified it too. In our industry it’s the one that clients want to see. We believed that levels 3 and 4 didn’t go far enough into the quality assurance element, as they were aimed more at a different type of manufacture, such as for structural steel.

How long did it take to achieve ISO 3834-2 Certification?

For Portobello-RMF it was a relatively short time; less than 6 months. It was just a case of getting an audit date scheduled. It could have taken us a lot longer, but our procedures were already very well developed and mature.

That said, it wasn’t without its frustrations. Trying to get your head around identifying hundreds and hundreds of welds on a piece of equipment was challenging. However, we adopted a common-sense approach that if you have numerous welds that are all the same, then they should all be numbered the same. It just fine-tuned what we were already doing.

What do you think the benefits will be and how has this changed the way in which your welding is carried out?

We’ve already adopted the procedures and best-practice into non-ISO 3834 welding that we carry out. This means that we are recognised as a proficient and high-quality welding company.

Third-party inspectors and client inspectors can see that we are a company that can be trusted as we do welder audits as standard.

(ISO 3834) provides the client with greater confidence that they’re getting the best quality.

Having a Responsible Welding Coordinator (RWC) is a huge advantage. One person who supervises all welding activities and the way in which they are carried out means we have total control. Their experience and knowledge is paramount to us. It’s changed the way that we keep records too, ensuring that we have full traceability including the weld history, welder qualifications and dates, NDE, consumables; the full package.

How has the landscape of the UK pressure vessel industry changed over the last 7 years?

For Portobello-RMF the export market is almost non-existent. It’s about 5% of our order book. We’re finding that this is because of each country’s ‘localisation’ requirements. And by this, I mean that each country will only now buy a small percentage of their goods from outside of their own locality.

I was part of a trade mission to Brazil about 7 years ago, when it was thought that Brazil was going to be the next ‘big’ industrialisation. Upon meeting with one of the leading oil and gas companies we were told that if we couldn’t supply 75% of the order from within Brazil then they wouldn’t buy from us. So what chance does that give us now with Brexit looming? If we leave Europe it’ll be another barrier to exporting our equipment.

How do you think Brexit will affect your business, and the broader UK pressure equipment sector?

We’ll deal with it like everyone else when we must. You cannot forecast what is going to happen. We buy a lot of material from Europe. If we can’t buy that from Europe where do we buy it from and at what cost to us and the UK manufacturing sector?

You’re a member of the Pressure Vessel Manufacturers Forum (PVMF). What success have you seen the forum achieve?

Undoubtedly this is the subject of pressure testing safety. The PVMF had been talking about this issue long before it became more of a high priority to the industry in general. From earlier discussions we’d had during our meetings, I learned some great best practice that we then implemented into our procedures at Portobello-RMF. Now moving the safety of pressure testing on into the digital age, we are considering remote monitoring of testing as another safety feature.

The work that some of the PVMF members have been doing to bring the pressure testing safety issue out into the wider world has been a tough grind, but they’ve stuck with it. Now we are starting to see the relevant organisations taking note and listening to us.

How long have you been a member of the PVMF and what were your expectations when you joined?

From the initial meeting in 2011. Portobello-RMF were one of the six core pressure vessel manufacturers that LRQA approached.

My initial hopes were that it would bring a commercial benefit to the UK manufacturers like how a similar forum works in Italy. The Italian forum brings together manufacturers and then actively seeks projects on their behalf promoting the group to the end client. In a way it’s like a mini-EPC. That said the discussions we’ve had with the PVMF over the years have brought both commercial and technical benefits.

We still need more UK pressure vessel manufacturers to join the forum, to give us input and their point of view on the issues that are being raised in the industry. As a forum for manufacturers, our voice is finally being heard, but we need more support. Many manufacturers see that competitors coming together is a barrier to joining, but it’s not. It’s more of a collaborative approach to contract fulfilment (on occasions); sharing knowledge, experience and every now and again sharing equipment!

Graham Avill joined the company in 2007 as Managing Director, previously he was Commercial Director with RMF Engineering Ltd, a special alloy fabricator. He started his working life 47 years ago at Robert Jenkins Ltd who in the 70’s and 80’s was one of the largest vessel manufacturers in the UK. Throughout his career Graham has travelled extensively around the world and had significant success in selling equipment into Asia and in particular China prior to 2007. Although when starting out his primary role was of a commercial nature Graham has gained broad experience in both the manufacturing and technical aspects of process equipment construction.

Formed in 2011 the PVMF brings together the UK’s market-leading pressure vessel manufacturers to share resource and industry knowledge both on technical and commercial issues. To provide a collective voice to influence to government, government agencies and standards settings bodies with regards to the engineering manufacturing environment.

Sponsored and facilitated by LRQA, meetings are held several times a year. Topics and subjects discussed are driven by the members and range from engineering issues such as the introduction of or amendment to codes and standard, fabrication techniques and health and safety to recruitment, procurement and commercial concerns.

Membership of the PVMF is a symbol of integrity and commitment to quality. You can learn more here.

Read how our remote inspection saves one client more than 50% in inspection cost.