Differentiating between the Triassic and the Devonian in the Moray Firth

In the early days of North Sea exploration, when seismic data was still relatively limited, it was difficult to distinguish between the stratigraphic interpretation of two overlying intervals of the same lithological character. For example, both the Old Red Sandstone of the Devonian and parts of the younger Triassic stratigraphy are primarily developed as red sediments, making it almost impossible to differentiate between the two when they are deposited directly on top of each other.

A nice example of the effect of gaining more insight into the Triassic and Devonian successions in the Moray Firth can be seen in Block 13/22 where the Captain Field was discovered in 1977 by well 13/22-1 (see map below). The first two wells drilled in the block, 13/22-1 and 13/22a-2, both reported a Triassic succession on top of the Devonian. The image of the composite well log from 13/22-1 (below) suggests the boundary between the Triassic and the Devonian was picked at the transition between low to high net/gross intervals. This seems to be a fair interpretation, but all the subsequent wells drilled into the field (of which there are many) show Jurassic rocks directly overlying the Devonian. In conclusion, at some point the proposed boundary between the Triassic and the Devonian was deemed to be invalid. Why?

The most likely explanation lies in the interpretation of (better quality) seismic data. Seismic lines across the Halibut Horst show a pinching out of Triassic rocks found elsewhere in the basin towards the high. For that reason, geologists must have decided to interpret the red beds below the Jurassic as being entirely Devonian in age.

In addition to exposing an increase in geological understanding of the basin, the fact that wells 13/22-1 and 13/22a-2 still contain a Triassic marker indicates that the well top database has never been revised. For the Geological Mapping project LR is currently carrying out on behalf of the Oil and Gas Authority, it is these aspects, along with many others, that we are trying to resolve for many instances. By doing so, the well top database is being interpreted on a more consistent basis, the results of which will help to underpin many of the resulting maps that will be generated as part of the project. 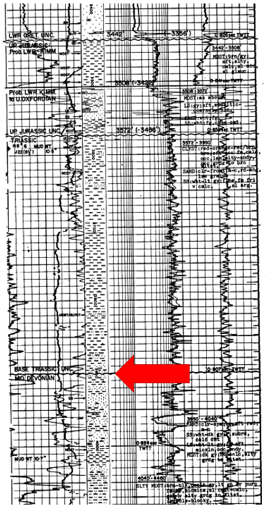 Composite well log from well 13/22-1, the discovery well of the Captain field. The boundary between the Triassic and the Devonian is illustrated by the arrow. 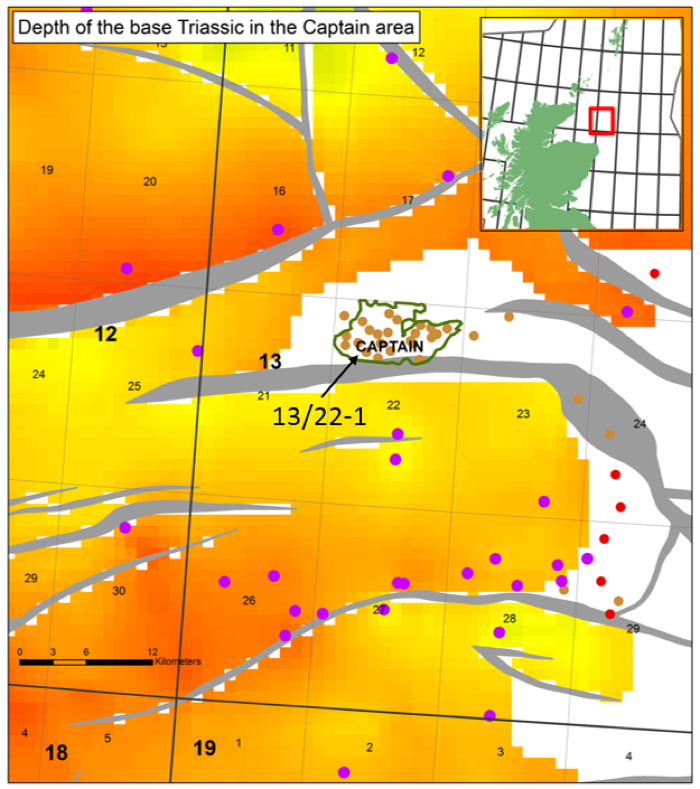 This map shows the depth of the base of the Triassic, as mapped in this project, in the area around the Captain field (green outline). The purple circles represent the wells where the Triassic was found, the brown and red wells indicate wells that TD in Devonian and Permian strata respectively. Initially, two wells within the perimeter of the Captain field indicated Triassic rocks to be present, but this was corrected for whilst mapping the area during the project.

This is article four in a series of posts dedicated to our project for the OGA. Read the previous article.