In the name of regional mapping.

The most important hydrocarbon reservoir in the Southern North Sea is the aeolian Rotliegend sandstone of Late Permian age. The maps below show most of the exploration and appraisal wells drilled in the UK Southern North Sea to date. All the wells on the maps have penetrated these Rotliegend sandstones, yet, as different oil companies have drilled these rocks over a timespan of multiple decades, different names were used to specify the same sandstone.

As part of the UKCS Regional Mapping project LRQA is working on for the Oil and Gas Authority, we rationalised the 20 plus different names used, into Lower Leman, Upper Leman and Leman Sandstone Members. 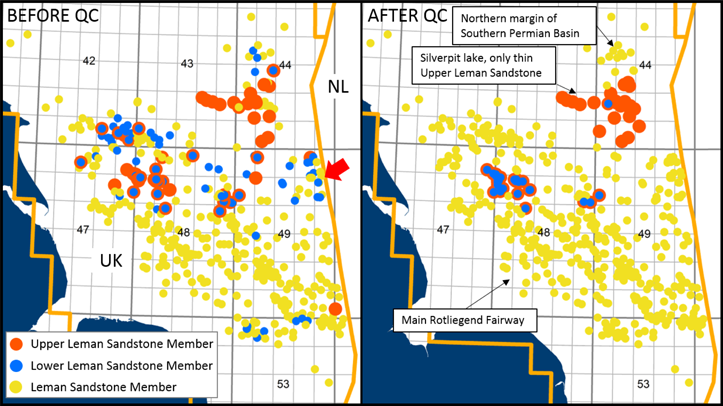 Following the application of a more consistent naming approach, it was imperative to make sure that the names of these Leman Sandstone Members were also correctly applied from a spatial point of view. For instance, in the area highlighted by the red arrow in the 'Before QC' map, blue and yellow wells can be seen close to each other. In fact, the reservoirs drilled by all these wells is the Leman Sandstone Member. However, some companies have named it Lower Leman and some have called it Leman. The 'Before QC' map on the left shows the disarray prior to rationalisation, and the 'After QC' map on the right represents a more coherent view after renaming the well tops.

In summary, by taking the steps described above, we enable users of the well tops data base (which will be part of the Southern North Sea data release later this year) to assess, much more quickly, the regional distribution of Rotliegend sandstones in the Southern North Sea, which facilitates regional exploration in the long run.

This is article six in a series of posts dedicated to our project for the OGA. Read the previous blog post.

Safety must be the number one priority